Our visitors in the Tanne should always feel welcome – whether in the Wine Tavern or our Studios. That’s the goal of Claudine-Sachi Münger and her team of committed Heroes, first-class suppliers and dedicated partners.

At the center of the tanneschaffhausen-Team are our Heroes: People who don’t let themselves be dragged down by a handicap, but work hard in the kitchen, as our waiters and cleaners to create a unique experience for our guests.

Fränzi supports our team of Heroes in their work in the kitchen, waiting tables and housekeeping. She’s gained experience as a group leader at a workshop for people with a handicap as well as in the gastronomy industry: She’s spent three seasons working in Lenzerheide and spent an exciting summer in an SAC mountain hut. Fränzi likes when her guests have time and together with her team contribute to a unique atmosphere. At tanneschaffhausen, she is fascinated by the combination of tradition and modernity as well as the mixed concept with studios, shop and restaurant. 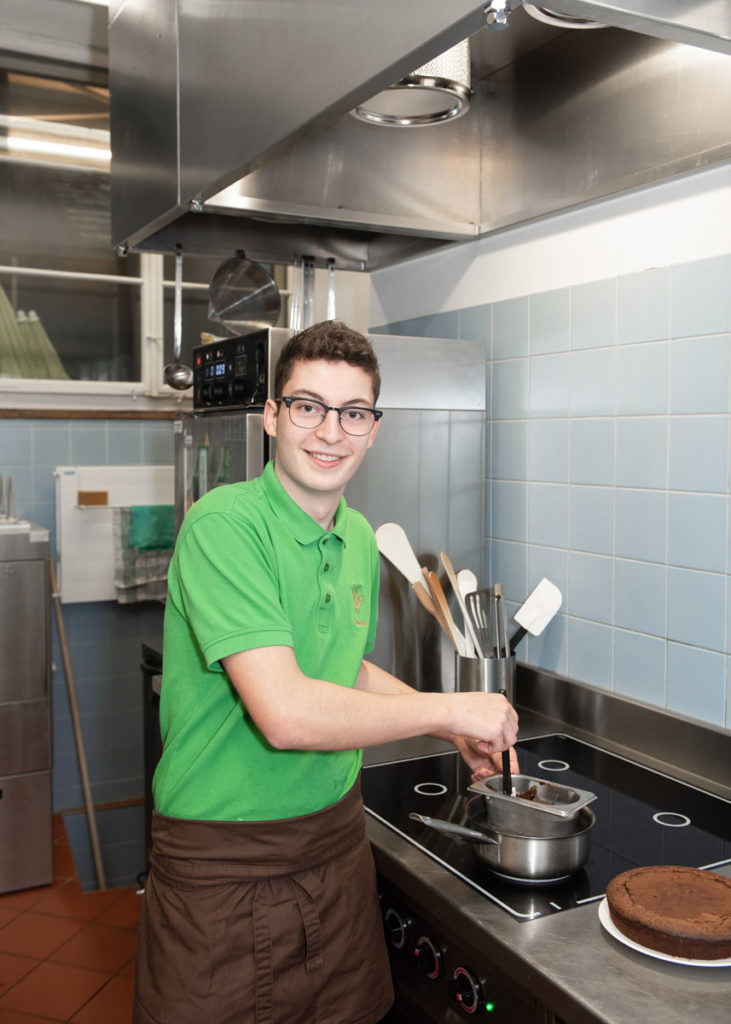 Kevin has always been a passionate cook and strives to continuously improve his skills. He completed his apprenticeship as a cook in the Wilchingen retirement home. Now he’s excited to manage the kitchen of an a la carte restaurant. He loves the open atmosphere at tanneschaffhausen, in which it is easy to discuss and work together. 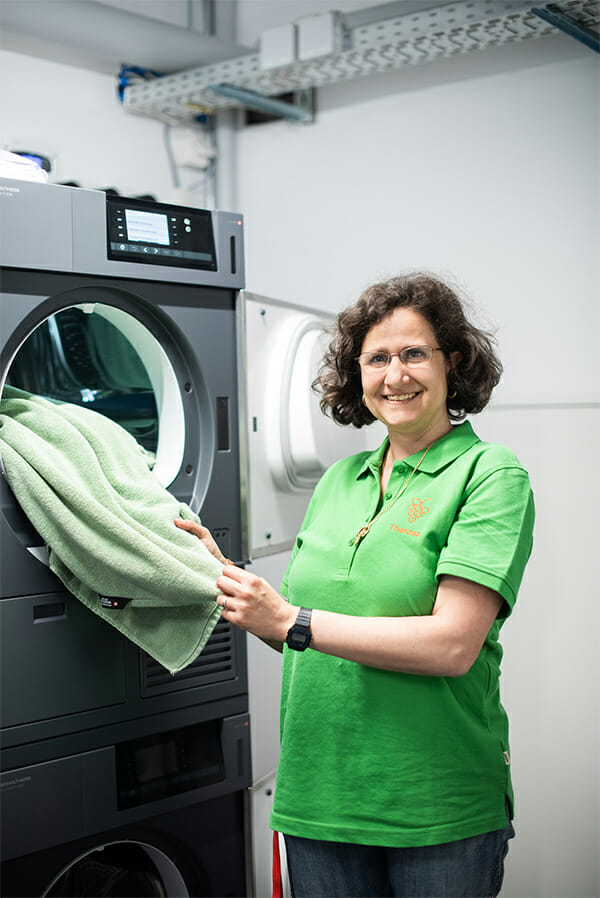 Although Theresa’s work happens mostly in the background, with her communicative nature she is always happy to engage in a conversation with guests and contribute to the good mood in the team. She is very experienced in her field and wants to continually improve and learn new things. Her favourite part of work is ironing. 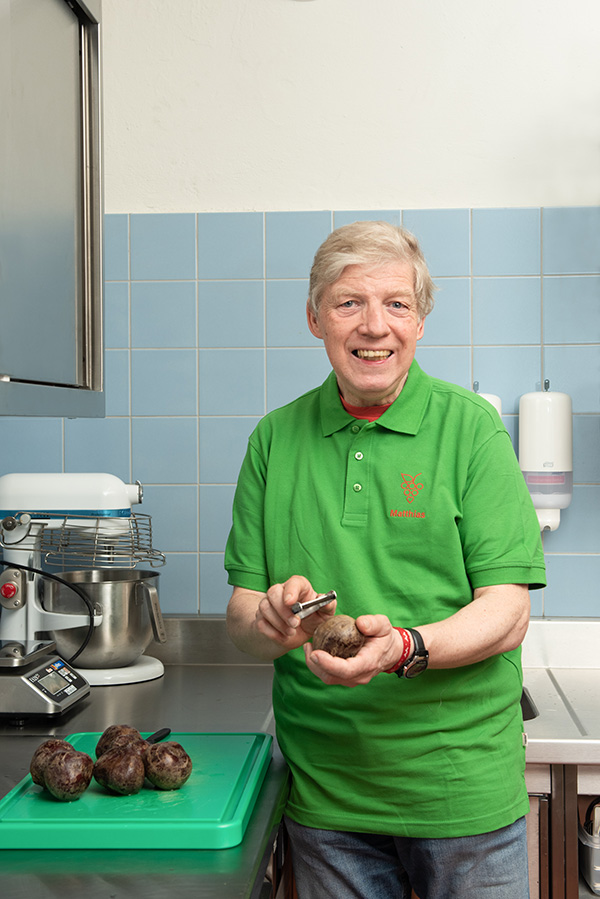 Matthias’ job at tanneschaffhausen is his first in the gastronomy business. After more than 20 years at his former workplace, he wanted a completely new experience. As a true local of Schaffhausen, he has been walking past the Tanne on a daily basis for years. Therefore, he is even more excited about now being a part of it. 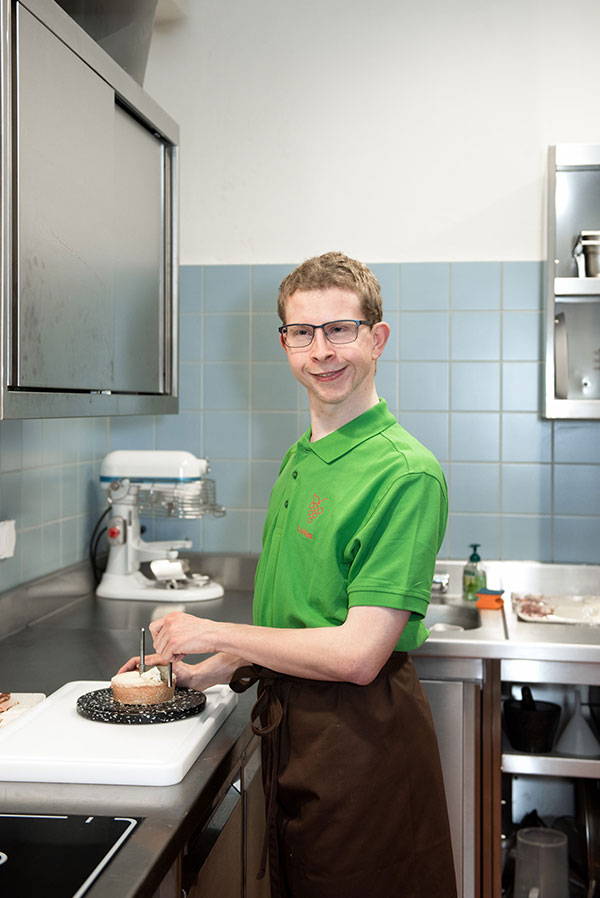 Lukas is the reliable worker in the background – to be more precise, in the kitchen. Trained with a home economics degree specifically for people with a handicap, he discovered his passion for cooking in a retirement home in the Klettgau region, where he gained his work experience. Now he proves his culinary expertise at tanneschaffhausen. 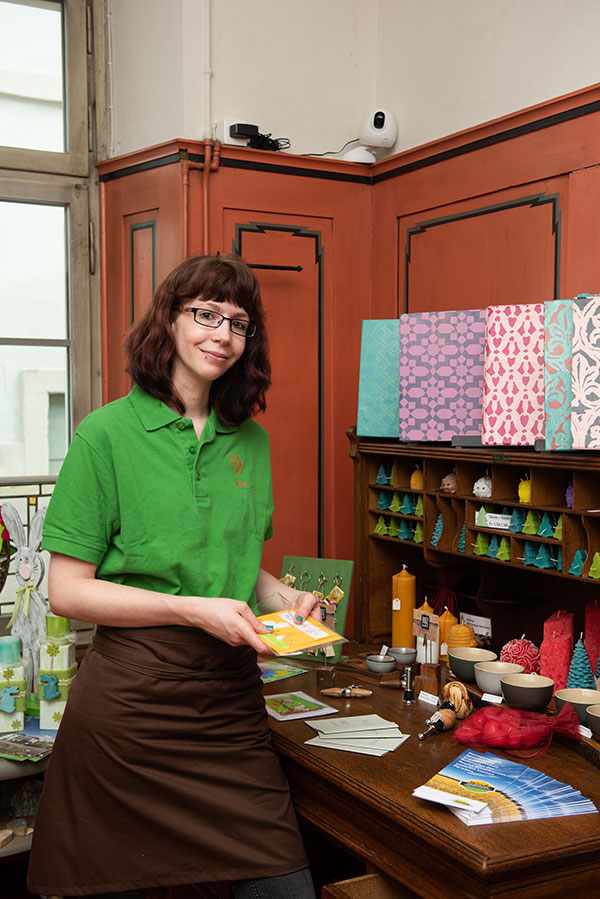 Silke is a newcomer to gastronomy. However, as a saleswoman in a textile and sewing shop she has gained a lot of experience in her field. It was there that she discovered her passion for a service-oriented profession and customer contact. At tanneschaffhausen, Silke likes the good teamwork and the mutual support. 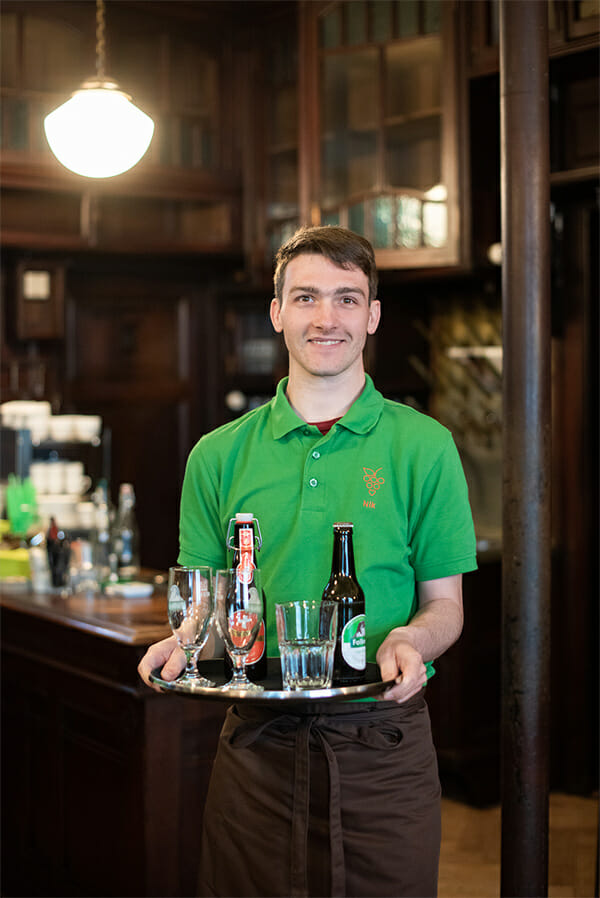 Nik is getting back to his old gastronomy profession at tanneschaffhausen. After his apprenticeship at the SIG-Hus in Neuhausen, he worked as a stablehand, blacksmith, and elevator mechanic. As a waiter he now wants to live out his social side connecting with customers and colleagues. Beside his work with us, Nik is responsible for the beverage department of a local grocery shop. 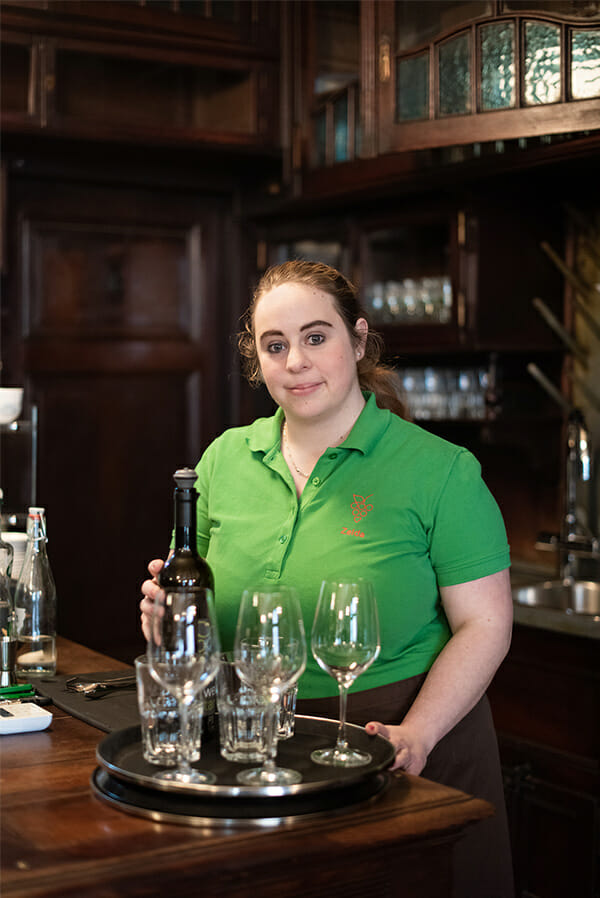 Zelda’s enthusiasm is infectious: She loves to tell stories, explain and cater to her guests. She not only loves her tasks as a waitress but performs them with care and concentration. Zelda’s big dream is to one day open her own café. 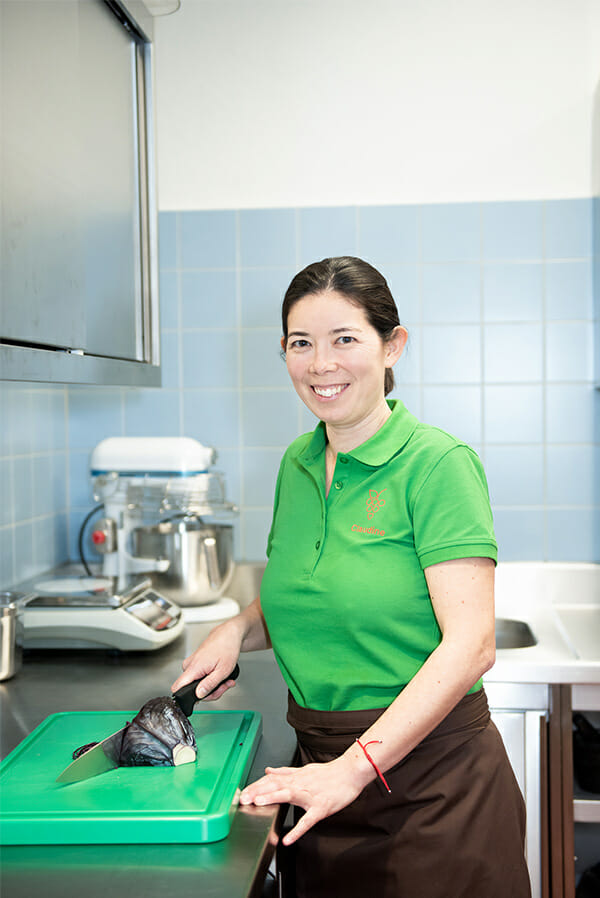 Claudine manages tanneschaffhausen and supports our Heroes at work. Already as a young girl she helped in her parents’ bakery and confectionary. Later she worked for years in sales and marketing in the food industry. At tanneschaffhausen Claudine combines her passions for gastronomy, kindness and humanity. 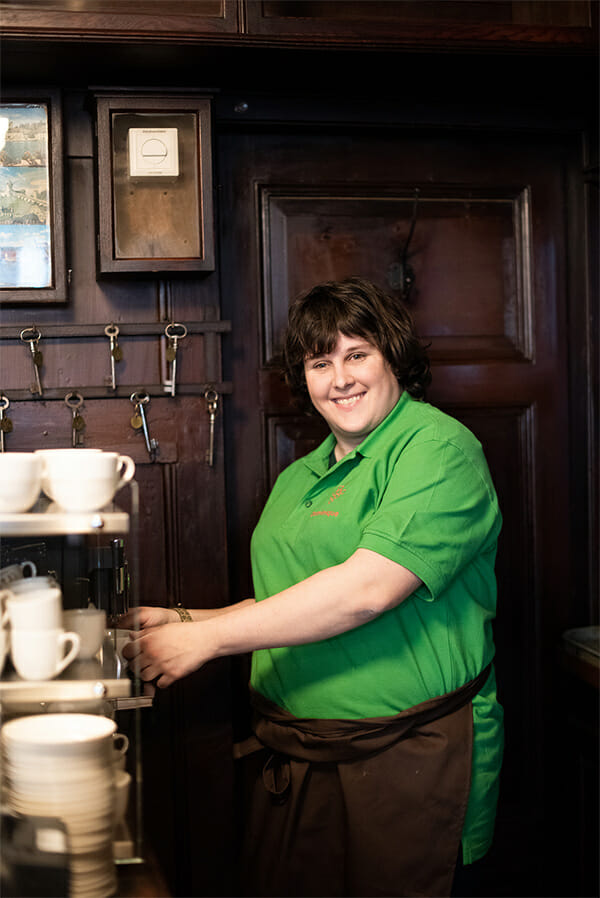 Dominique always needs action. As a waitress, she therefore feels most comfortable when the restaurant is busy. The gastronomy newcomer gained her first experiences in an integrative school in Winterthur and wants the refine her skills at tanneschaffhausen. With her kind and helpful personality, she is just as happy with her regulars as with new faces. 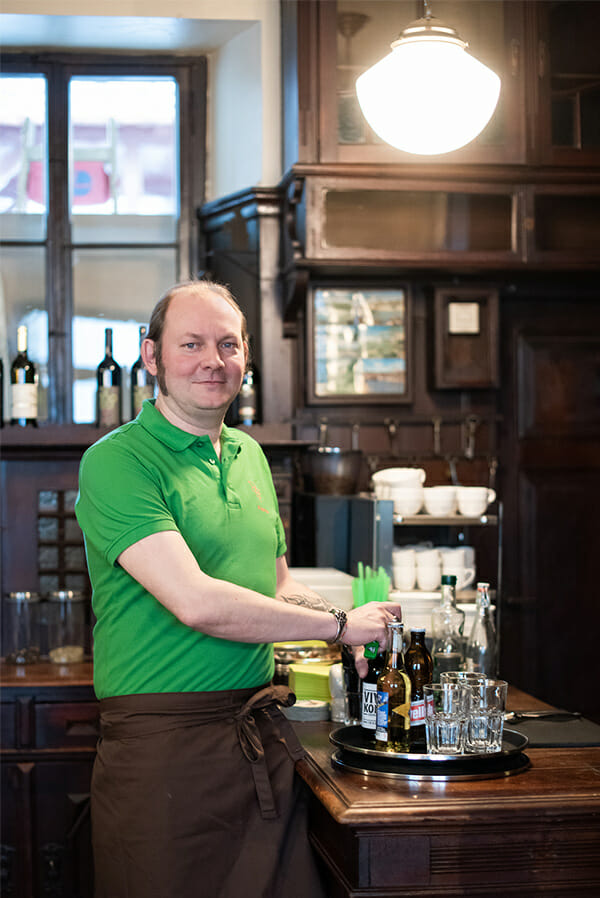 As a calm and down-to-earth person, Florian brings a lot of positive energy to tanneschaffhausen. He supports our Heroes and enables them to perform their tasks as independently as possible. Florian has worked in gastronomy for many years, his last position being that of manager in a restaurant in Winterthur. At tanneschaffhausen he enjoys the kindness in a usually so hectic industry.

In our Wine Tavern and in the Tanne-Shop we only offer premium regional products. Our suppliers are carefully chosen manufacturers who pursue extraordinary paths with passion and creativity and thus ensure the highest quality. We are proud to bear the label Naturparkwirt of the Regional Nature Park Schaffhausen. 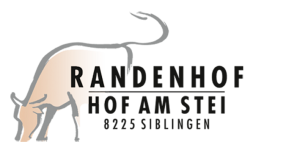 For generations the winery «aagne – Familie Gysel» has cultivated its vineyards. With this experience and new ideas, it creates excellent wines. The grapes come from local territory and are harvested with care by hand.

The enthusiasm for vines and wines and the motivation to produce something excellent are the cornerstone of «aagne». The «aagne» wines have also persuaded the experts and regularly win awards.

Altra Schaffhausen with its about 600 employees enables people with a handicap to follow a career. A part of altra is the organic farm Löwenstein.

The numerous busy and motivated hands of the workers there grow fresh vegetables and crisp salads. Eggs, fresh beef and Mangalitza pork, various herb salts and oils and much more are offered at the farm.

From the organic farm Löwenstein we buy our vegetables, fruits, and the meat for our lunch meals that bears the labels Bio Suisse and KAGfreiland.

A small café that produces its own coffee in the middle of Schaffhausen’s old town – that still exists! At bohnenblühn, the manager herself is responsible for the coffee roasting in the cellar. She produces high-quality and delicious coffee beyond words.

Bohnenblühn procures its coffee beans only directly from coffee farmers. Therefore, as a coffee lover you can be certain that it comes from ecological cultivation in fair working conditions. The wide selection of bohnenblühn-coffees is roasted and poured with love – you will taste it from the first to the last sip.

Chäs-Marili is the cheese specialist of Schaffhausen, located centrally on the Fronwagplatz square. With its rich selection of more than 120 sorts of cheese, mainly from Switzerland and France, it offers everything a cheese connoisseur can wish for.

Our generous cheese and mixed platters are created with cheese by Chäs-Marili.

She is the «Ginger Lady» of Schaffhausen: Edith Dreher and her Dreher’s Fine Food create a wide variety of Ginger specialties such as liqueur, preserve, syrup, sweet and salty snacks as well as many kinds of pastries.

Apart from the aromatic root, Dreher processes various spices and fresh fruits that she often picked herself. In fact, everything at Dreher’s Fine Food is self-made: From procurement and production to sales.

Esther Dreher is wildly successful with her premium products, which have made their way into the gourmet sections of big department stores. Meanwhile, her liqueurs and spirits have won gold medals.

The family business HWG Weine from Wilchingen cultivates a vineyard of about three hectares. They have turned the biggest part of the grapes has into their own wine – or «aagne Wii» as people from Wilchingen say –since 1980.

The wine production is, of course, focused on Blauburgunder or Pinot Noir, with Regent, Merlot and Cuvées adding to the selection. The white wines include the traditional Riesling-Silvaner as well as Chardonnay and aromatic Blanc de Pinot Noir.

Wines from HWG Weine can be tasted in the Wine Tavern or purchased at the Tanne-Shop.

The family-run butcher shop Metzgerei Niedermann with 40 employees is known in the region and beyond for its home-made sausage and meat specialties.

The butcher shop sources its meat, if possible, from famers in the Schaffhausen region. Particular specialties are sometimes purchased from Swiss or foreign distributors.

Metzgerei Niedermann offers us its best products and makes our meat a delicious treat.

The bread we buy at Müller Beck is baked in traditional workmanship in the bakehouse. The bakers know that a good bread needs time and the best ingredients. That’s why Müller Beck relies on local suppliers. Experience, creativity and curiosity are the daily motivation of about 70 employees. Only the best ingredients finds their way into the bread – which is noticeable in every bite.

Pistor was Claudine’s last employer before she opened her own business with tanneschaffhausen.

More than 100 years ago, Pistor was founded by the Swiss Baker’s Association as a national buying syndicate. Today, it is the leading trade and service enterprise for the bakery and confectionery as well as the gastronomy and care industries.

Pistor supplies tanneschaffhausen with the expendable material that is necessary to run a successful gastronomy business.

Siblinger Randenhof is a farm that is run by the Schipholt family and its helpers according to the Demeter standard.

The dairy cows can keep their horns, spend the whole summer season on grazing land and the winter in a straw-cushioned barn with a generous yard. All dairy products are made from conservatively processed raw milk in careful manual work.

We purchase a delicious frying cheese, which is a dream for cheese lovers and as a meat substitute, from Siblinger Randenhof.

The municipal vineyards Munot and Rheinhalde produce about 20’000 kilograms of grapes every year, which are then pressed into excellent wines. The wine is sold directly in the flower shop of Grün Schaffhausen, in private stores, restaurants and at official functions of the city of Schaffhausen.

In the wine menu of tanneschaffhausen, the city’s vineyards can be tasted in the form of an elegant Munötler Pinot gris and a strong Munötler Pinot noir.

For more than 20 years, the Keller family has produced wine – ranging from white specialties, light-sweet Cuvées and strong reds to unique dessert wines. All of those are available in the impressive vaulted cellar at Schwabentor and on WeinKeller.sh.

Family Keller’s biggest pride are its premium wines from the Heerenberg vineyard in the city of Schaffhausen, which blossom high above the Rhine river in a prime location.

WeinKeller.sh delivers us a fruity Charmeur weiss made from Pinot blanc and Chardonnay.

The Brauerei Falken (Falken Brewery) is one of Switzerland’s five main independent breweries. Since 1799 it has stood for freedom, independence, and the pride of a really good beer.

Falken doesn’t only use its slogan «Ein Schluck Heimat» («A sip of feeling home») to show its regional ties, it also lives up to it – and thus satisfies the need for a piece of home in an increasingly globalised world.

The Falken Brewery is the sponsor of not one, but three of our Serviced Studios, and provides our guests with refreshing beers (Lager, Hülse, Eidgenoss and non-alcoholic), its own Gin82 and Munot Malt as well as fine Grappas.

«Quality starts in the vineyard» is the motto of GVS Winery, whose history began more than 80 years ago.

Today, 160 vintners take good care of the vines in the Schaffhauser Blauburgunderland (land of the Pinot Noir), whose grapes are carefully and with great experience processed into international and national medal-winning premium wines by GVS.

GVS presses the exclusive house wines «rottanne» (Pinot Noir, Maréchal Foch & Dornfelder) and «weisstanne» (Riesling Silvaner & Pinot Blanc) that are available by the glass or bottle in the Wine Tavern and of course to buy at the Tanne-Shop.

The following partners actively and passionately support our project. Thank you!

The municipal vineyards Munot and Rheinhalde produce about 20’000 kilograms of grapes every year, which are then pressed into excellent wines. The wine is sold directly in the flower shop of Grün Schaffhausen, in private stores, restaurants and at official functions of the city of Schaffhausen.

In the wine menu of tanneschaffhausen, the city’s vineyards can be tasted in the form of an elegant Munötler Pinot gris and a strong Munötler Pinot noir.

Tanne in the media...